Skip to content
Guest Poet: Zaro Weil
Zaro Weil was born in the United States. For the first twelve years of her professional life she worked as a dancer, performer, writer, educator, choreographer and theatre director in a theatre/dance company which she founded in St Louis, Missouri. The company, Metro Theater Circus, travelled to schools, universities and art centres all over America, including several performances at the Kennedy Centre in Washington DC. It continues to perform to this day, as Metro Theatre Company. Metro won many national grants and awards for arts innovation under Zaro’s leadership.
After moving to London in the 1980s, Zaro performed in fringe theatre, studied flute and dance and wrote several books including
In 1992 Zaro founded the non-fiction publishing company MQ Publications which she ran successfully for 16 years, building a team of 35 employees operating from offices in London and New York. The company was sold in 2007, and Zaro moved to southern France where she has dedicated her time to writing poetry, stories and plays for children.
Recently Zaro has had several books published with Troika Books; Firecrackers, illustrated by Jo Riddell, Spot Guevara Hero Dog, illustrated by Katy Riddell and Cherry Moon, illustrated by Junli Song. 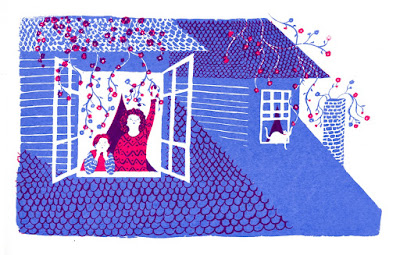 I TRIED TO CLAIM THE MOUNTAIN
I tried to claim the
mountain
thought it was mine
after all
I watched every day
saw how it
woke swirling a haloed
mass of puffs
saw how it
sat silent at noon
wrapped in stock-still stripes
green now grey now
green again
saw how it
rose at twilight
a cream-frothed peak
crimson-fired below
then slide into dark and the
purpled nether world
daily nightly
I watched the mountain
part wind into strands
slice earth into rock
sun into beams
even moon into stars
but the mountain
didn’t hear when I called
didn’t talk
never noticed me
that is
I didn’t think so
until one day oh
a shattering of light
jarring  of stone
storm of dust
the mountain welled-up
pulsing new-born
inside of me
and
without one word or
rumbling breath
claimed me
zaro weil, July 2019